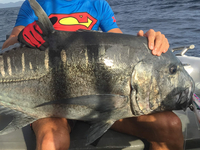 If there are three letters in the world of topwater fishing that spells high adrenaline action – then it must be "YFT" - Yellow Fin Tuna!

Actually, we thought we would have had a lot of tuna-action by now! Hadn't it been for these damn potholes in the runway on Ascension Island we would already have been in full swing chasing YFT. But with the air bridge between UK and Ascension expected to be closed down for at least another couple of years, we have of course been busy looking for YFT-action elsewhere. And sometimes, one door closing is another one opening.

Look what we found! Another great tuna-adventure, and this one is only nine to ten hours travel time from home. Add to that, affordable airfare, great boats, fantastic tuna-action – and a young, keen captain that is bending himself backwards to put his home country of Oman on every popping angler's dream list!

We're going – and you can join us! The dates for our first group is set and we're now looking for six anglers that either have the power to tame these hard fighting brutes – or the self confidence to think that they can!

Oman, like neighbouring Dubai, isn't the cheapest destination around. Add to that top of the line boats, free use of tackle and no limits on fuel consumption, even if the tunas are far out in the Gulf of Oman, and you'll understand what a great offer this is:

Not included: Flights to Muscat, evening meals and drinks.

And the flights to Muscat? They are usually dirt cheap!

*as some flights are leaving Europe late in the evening you can also depart from Europe Friday night, arrive in Oman early in the morning of Saturday the 14th, go sight seeing or relax by the pool all day and be well rested for the first day of fishing on Sunday the 15th (extra fee for additional night at the hotel)

Get in touch to secure your spot!

Where are you located, and what is your fishing background?

We are located in Muscat, Oman. Specifically at Marina Bandar Al Rawdha. I started off my game fishing career in 2008 and have been involved in numerous world qualifying championships in this region. I qualified to Costa Rica in 2016 and finished runners up in the Fujairah Offshore Fishing Tournament 2017. Then I travelled to the Outer banks in North Carolina in 2014 for the almighty Bluefin Tuna with the Saltywater Tackle crew.

When, and how, did you discover the tuna fishing in Muscat?

Muscat has always been known to be home for the Yellowfin Tuna and other pelagic species. Unfortunately, we had a very bad run of fishing from 2007-2011 due to Korean fleets trolling nets in our waters in collaboration with an Omani sponsor. This made our fishery suffer and luckily this form of fishing has been banned since 2011. It took a couple of years for the fishery to recover and I decided to bring in the topwater game I picked up in the states in 2014. It has been a great success!

For how long have you been tuna fishing in Muscat?

I started briefly in 2014 and have been doing it extensively since 2015. Nevertheless, the captains that work for us have been tuna fishing in Muscat since the late 90s and have been working with popping techniques for 3 to 4 years now.

How do you fish for the tunas – is it a lot of drifting & blind casting or is it more of a hunt?

We never blind cast or drift in Muscat. First, we locate the fish using all available means, whether it is local intel, marine radars or experience. Once the fish is located then it’s a hunt, most of the time we fish for the YFT feeding with the dolphins (Spinners and common dolphin). During part of the season (April to July) they can be found both with dolphins as well as busting solo. We mainly target the YFT on popper or stick bait, and sometimes jigging. Live bait is always a back up with us just in case the fish are really picky. Most of the time our poppers are inhaled sooner or later.

What is the tuna season in Muscat?

Tuna can be found year round in Muscat if searched for enough. The peak season is from March to July as the water warms up and turns blue.

What weather should be expected during season?

The weather is generally predictable during the season. A long swell could be expected from May to July during the SW Monsoon season in the Arabian sea (20 days a month would be fishable).


How far will you run to find feeding tunas?

During the season the fish are often first spotted from 20-30km offshore. We don't have any restriction and sometimes run in deeper to find the right feed. Typically, it will be somewhere between 30 and 100km offshore.


On an average day during tuna season what kind of action could be expected?

What sizes are the tunas you're catching?

Average size during the season is 40-60KG, smaller YF in the 10-20KG range are also encountered. This April, numerous specimens between the 70 and 100KG range were caught.

What is the biggest YFT landed on popping tackle on your two boats?

What king of tackle (PE rating) do you recommend?

PE 5-6 is what we’ll be using for the 40 to 60KG class fish which are dominant during the month of April. Nevertheless, one heavy rod (PE8 to 10) could be required once the fish crosses that 70KG mark.

Which lures are amongst your favorites for YFT?

Our rule of thumb:

Can you hire tackle, or is it included – and if so, what kind of tackle do you offer?

Are there other species to fish for, and if so how do you fish for them?

Yes, mahi-mahi and sailfish – both of which can be targeted on topwater as well. We also have some inshore light tackle jigging for amberjacks, grouper, long-tail tuna and barracuda.


And finally: In Oman, is it possible to get a cold beer after fishing?

Yes, it's possible to get a cold beer after fishing :-) 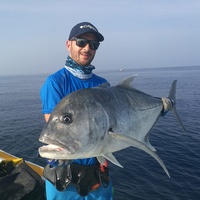